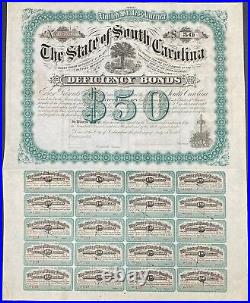 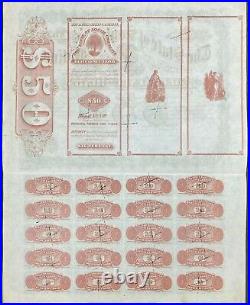 This issue was catalogued by the late Grover Criswell as Cr. The central vignette features an apparently healthy palmetto tree, seeming to grow in a field by itself, with numerous other trees in the distant background (none of those appear to be palmetto trees, however). Printed in bold letters above is ” The State of South Carolina “, while flanking the vignette is a funding statement, separated into two parts. The one at the left indicates that this bond was ISSUED UNDER AUTHORITY OF AN ACT RATIFIED MARCH 22. 1878 “, while the one at the right completes the statement by giving the reason that the bond was ” TO PROVIDE FOR THE SETTLEMENT OF THE UNFUNDED DEBT OF THE STATE, INCURRED PREVIOUS TO NOV. Immediately below the vignette, printed within a decorative box, is ” DEFICIENCY BONDS “, with the denomination in dark green atop the financial obligation. On the first day of July A. One thousand eight hundred and eighty eight, and interest thereon at Six per cent per annum.. A concluding section guarantees that. In Witness whereof, these present are signed by the Governor and countersigned by the Comptroller General, and have the great seal of the State affixed hereto. Done at the City of Columbia, the first day of July A. , though since this piece was not issued, the guarantee section was never fulfilled. A second vignette appears at the lower right, this one depicting what seems to be a palmetto tree possibly being used as a cenotaph, as it is surrounded by a four post fence design. All of the foregoing elements are enclosed in a dark green rectangular border, neatly separating them from the 20 attached interest coupons. Each of these coupons was valued at ” ONE & A HALF DOLLARS ” and bears a blank line for the signature of the ” Treasurer ” of the state. Unlike earlier bonds, especially those issued by the Confederacy, this piece features a fully printed back design, including the denomination, a recapitulation of the contents, a representation of Columbia, and a classically draped youth. Each of the coupons bears a printed back, with the state name, coupon number, and bond type at the center, flanked by medallions. The bond was printed by Walker, Evans & Cogswell, Charleston, S. L 1054 , as evidenced by their imprint on the front at the lower left. This attractive piece would frame beautifully, becoming the focal point of any den or office. Given the fact that this bond was never issued, any condition issues are a result of the storage that this piece has received. Light toning is present across the entire surface, imparting to the paper an off-white to beige hue. The edges are slightly darker, with a few brownish stains around the periphery (especially at the bottom). Small foxing spots are scattered throughout the design, though none of these are particularly large or detrimental to the overall eye appeal. Several folds are noted, as is a moderate amount of wrinkling at the edges. Several small tears are present at the edges, easily repaired with archival tape or covered by a mat if the bond is framed. Six “X” cancellations are present on the principal instrument, with one present on each of the coupons (due to the size of the pieces and design elements, the cancellations are significantly more pronounced on the coupons than the principal instrument). Measuring approximately 16 x 20 inches, this bond would make a very attractive display. A great reminder of the end of Reconstruction. If you have any questions regarding this item, please ask before purchasing. He has contributed to numerous reference books within the industry, as well as being a co-author of The Comprehensive Catalog and History of Confederate Bonds, 2. Edition with Douglas B. He is an authorized submitter to NGC, PCGS, and PMG, a diamond founding member of Coin Dealers Helping Coin Dealers and a supporter of the Industry Council for Tangible Assets. American Coins and Collectibles can be found at many of the state and local coin shows. American Coins and Collectibles. This item is in the category “Coins & Paper Money\Stocks & Bonds, Scripophily\Government & War Bonds”. The seller is “coin4u” and is located in this country: US. This item can be shipped to United States.