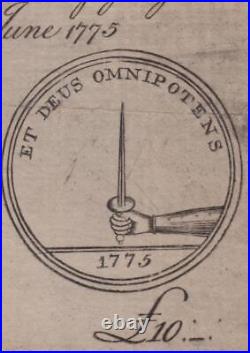 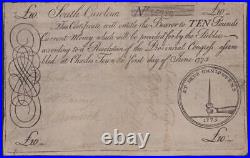 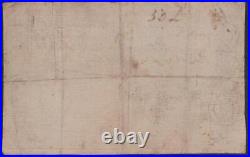 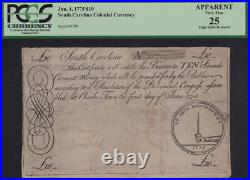 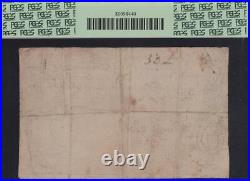 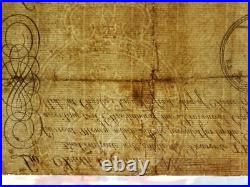 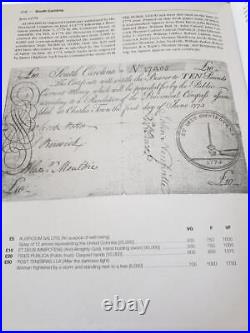 Scarce, Choice, and High Grade. Very conservatively graded & certified by PCGS as VF25 Apparent, with the mention of “Edge Splits Restored”. Scarce, in the fact that PCGS has graded a number of these, but all of them are apparent graded with some sort of problem except for one single example. That problem-free example is graded a very modest F15. So, every higher graded, attractive looking 10 Pound note should be desirable. This PCGS VF25 Apparent SC-99 is very attractive with minimal problems, and is one of the highest graded examples to have survived. This PCGS graded VF25 SC-99 example is graded higher than any of PMG’s graded SC-99 notes to date. PMG has graded a total of (17) examples, and all are graded lower except for two at the same VF25 grade level as this PCGS example. It is very likely that all (or nearly all) of these (17) notes are Net graded with problems. On the front side is a bold rendition of a seal that is described by Newman as thus. Latin motto ET DEUS IMNIPOTENS (And Almighty God). The back side is “black” as always for this denomination, but this particular note was fortunate to have. A very large watermark embedded into the thin laid paper itself. To me it looks like a crown on top of a double circle with a floral design within that double circle. These watermarks are “hit and miss”. Most examples do not have any watermark, or just a partial. (see last photo for watermark). Bold 5-digit serial number 45789 in brown ink along with the equally bold written signatures of Jacob Motte, Benjamin Waring, John Berwick, John Neufville, Peter Bacot, and (lightly) William Gibbes along the vertical centerfold. I have found little info on Mr Jacob Motte other than he was a staunch supporter of the colonial rebellion, and that he died in 1780, but his wife (widow). Rebecca Motte has retained notoriety as an American Revolutionary War Heroine. A quick search will reward you with a very interesting historical bio, including an incident where she provided. General Nathanial Greene’s Continental Army. General Francis Marion’s (known as The Swamp Fox) Brigade. Henry (Light Horse Harry) Lee father of Robert E. A quiver of combustible arrows from East India that would set fire to her own house which was taken over by the British and made into an enemy fort. Served under Colonel Daniel Horry Regiment in the. South Carolina Light Dragoons. (horse cavalry) and saw action during the siege of Charlestown in the battle known as. The Battle of Moncks Corner. On April 14, 1780. These large format (about 7″ wide x 4″ high) were printed on very thin weak fine laid paper that was often folded to fit into a patriot’s wallet, and then unfolded many times as it circulated. The result is that only a handful have survived the past 247 years, and the few that have, all seem to have problems such as tears, edge splits, etc. This example is visually the nicest I’ve seen in the past 20+ years with the bold & complete seal, full text, bold serial number and all six signatures, and three full borders while the forth (top border) is just a little tight, but nice enough. (trackable) to anywhere in the United States. And as always, “the item you see listed is the exact same item that you will receive”. Get Supersized Images & Free Image Hosting. Create your brand with Auctiva’s. Attention Sellers – Get Templates Image Hosting, Scheduling at Auctiva. Com. Track Page Views With. This item is in the category “Coins & Paper Money\Paper Money: US\Colonial Currency”. The seller is “colonial-americana” and is located in this country: US. This item can be shipped to United States.